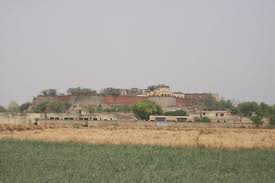 Etah had been the seat of administration even during the period of colonization of India by the British sovereignty. Etah had stood as a bystander during various important historical events and still bears the age-old signs of several magnificent actions of the past. Many important historical sites and structures are also located in the nearby areas of Etah. Etah and its surrounding communities had also been the birthplace of a wide number of famous historic personalities.

Aintha was the original name of Etah in the ancient times. The name Aintha was given to Etah by the monarch of Awagarh. One day when this ruler of Awagarh was traveling through the forest to hunt animals, he came across the sight of two dogs chased by a fox. This incident inspired the Awagarh king to name that place as Aintha. The name Aintha gradually changed to Etah over the centuries.

Etah played a significant role in the Sepoy Mutiny of 1857, which was India’s first struggle for freedom. During the Indian Rebellion of 1857 Uttar Pradesh was one of the major centres of aggression. Etah, being a part of Uttar Pradesh, was an important location during the Uprising of 1857.

Numerous historical sites are located in Etah, which include the temples, the Awagarh Fort and the Gurukul of Etah. Gurukul Vidyalaya is an age-old boarding school at Etah, which is known far and wide as a popular tourist attraction.

The famous lyricist, intellectual and composer Amir Khusro was born in the Patiyali area of Etah.

Etah is also famous for being home to many other historically famous personalities, such as Raja Balwant Singh of Awagarh. Raja Balwant Singh was an influential Jadon Rajput of Awagarh. He founded the Raja Balwant Singh College of Agra and granted land for the construction of the college building. He also assisted Nobel Laureate Rabindranath Tagore in establishing Shantiniketan, the famous residential school in Birbhum, West Bengal.

Most of the religious places in Etah are historically very important. The dargah of Abdul Gafoor Shah, renowned Chistia Nizamia Sufi saint is located at the Holi Gate area of Etah.

Soron is famous for being the birthplace of Tulsi Das Goswami, the Hindu saint, poet, truth-seeker and reorganizer. He was born in 1497 and his affection for Lord Rama was known across the nation.

The Noah Kera village is known widely for being the mythological venue for wedding of Rukmini with Lord Sri Krishna.

The Kailash Mandir is another historic place in Etah established 148 years ago by Raja Dil Sukh Rai Bahadur, the then Kulshreshtha King of Etah.