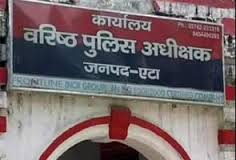 Etah is the administrative capital of Etah district of Uttar Pradesh. The Lok Sabha constituencies are the ruling power in Etah.

The Backward Regions Grant Fund Programme presently subsidizes all necessary funds required for the development of Etah district. Etah had been acknowledged by the Ministry of Panchayati Raj, as one of the 250 districts in India, which are most underdeveloped. There were 640 underdeveloped districts in India in 2006 and that year Etah was recognized as one of those. It is a district in Uttar Pradesh out of a total of 34 districts that comprises of 3 tehsils and 8 blocks.

J.P. Trivedi, the District Magistrate, and his office looks after the governance of the city of Etah and other townships in Etah. The District Magistrate’s office watches over all the administrative paperwork, legal matters, financial reports, local and national polls, entertainment tax, property or real estate dealings, hygiene and supply of electricity and drinking water.

Member of Parliament in Etah constituency

The only current Member of Parliament in Etah constituency is Shri Kalyan Singh of IND. His office at Etah started functioning on 18th May, 2009. He is an elected and active Parliamentary member.

The office of the Superintendent of Police in Etah is situated on Etah Main Road.

The police stations in Etah District:

The Municipal Corporation Office or Nagar Palika Parishad of Etah is a local administrative body of the metropolitan area of Etah, population of Etah being 131,023 as per the records provided by the 2011 census. A municipality is concerned with the administrative decisions and activities of a community, which has a population of about 100,000. As Etah is small district, the Nagar Palika Parishad is guided by the system of Panchayati Raj and works jointly with the various administrative bodies of the Government of Uttar Pradesh.

Each member of the Etah Municipal Corporation is chosen as an authoritative part of this administrative body for a 5-year term through elections. Etah is sectioned into wards in accordance with the total number of people residing here and from each of the wards one member is elected. The president of the municipal corporation in Etah also comes into power with voting among the municipality members. The president is the person responsible for organizing and conducting meetings. There is a chief officer in the Etah municipality and other officers, which comprise of the health officer, engineer, education officer and sanitary officer. The Uttar Pradesh Public Service Commission employs these government officials to administer the workings of the Etah Nagar Palika Parishad.

The Nagar Palika Parishad of Etah is involved with the entire urban infrastructure of the city, which includes:

The municipal body of Etah is run by: